A Little Hawthorne for the Holidays

Hawthorne came to us as one of the three Halloween kittens, who were abandoned when someone moved and rescued in October. Three little black kittens, sweet as could be, rescued just before Halloween. We named them Harriet, Hazel, and Hawthorne.

Harriet and Hazel both found great homes a few weeks ago. Hawthorne is still in foster care, being as cute as he possibly can.

He loves exploring high places. You may find him on the top of a door or on any tall perch he can find. He loves playing and chasing his foster brothers and sisters up and down the stairs. He also loves food, and will steal it from his foster brothers and sisters if they let him get away with it! (Mostly, they do, because this mischievous but adorable little guy is so hard to resist.)

But most of all, Hawthorne loves lovin'. He's resting his chin on my hand right now as I type this. His favorite place to be is right next to you. Unlike many cats, he loves to be picked up and held. Because of his size and floof factor, we wondered if he is part Maine coon, but now we are starting to wonder if he has Ragdoll in him!

Whatever his origins, Hawthorne is a great cat who reminds me of another most excellent  black cat who was fostered here a few years ago, Sirius Black--now happily adopted and known as Sirius Black Sabbath! We hope that Hawthorne, he of the magnificent ebony plume and the loud, contented purr, finds his own happy ending soon.

If you are interested in adopting Hawthorne, send an email to mirishouse(at)gmail.com or fill out an adoption application at CARE Southcoast.

A Home for Owl and Smudge?

Owl and Smudge had some visitors today! We are hoping they may have found their forever home.

Our terrific tabbies have been joined by the three Halloween kittens, three beautiful black kitties who were left behind when people moved away. We've named these sweet little ones Hawthorne, Harriet, and Hazel Halloween, and we hope that they will be the next ones to find homes.


But in the meantime, it's so much fun giving them lots of love, playing with them, and watching them grow up!

If you would like to help our fostering mission, we can always use food, litter, and cat toys. We accept donations through our Amazon Wish List and through Paypal (send to paypal.me/MirisHouse). Thanks for supporting Miri's House!

We have wonderful news! Our beautiful black foster kitten, Eleven, found a home. He now shares a space with two other black kitties, Wednesday and Gypsy, and his person informs us that Wednesday has taken on the role of mom. His new name, which we're sure he'll live up to, is Sir Thatcher of the Compound. Hail, Sir Thatcher!

Meanwhile, Smudge and Owl, the two tabby kittens, are growing up and getting cuter and more playful every day! They both are fixed, up to date on shots, and available for adoption. We think they would make a great pair, because they love to play together and sleep snuggled up, but they can also be adopted individually.

These two cuties are being fostered for CARE Southcoast. To adopt Smudge and Owl, please visit CARE and fill out an adoption application. You can arrange a visit so you can meet and greet them in their foster home. Email mirishouse (at) gmail.com or call CARE with any questions.

"I wanted to live deep and suck out all the marrow of life."
- Henry David Thoreau 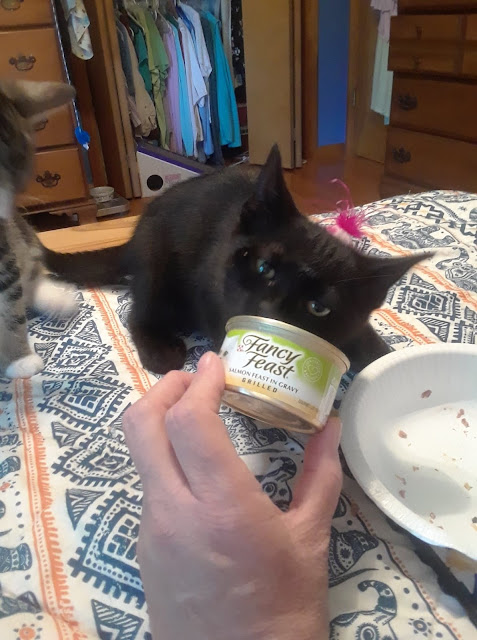 New Kits on the Block

Some new kittens have joined the household! We are fostering them for CARE Southcoast. 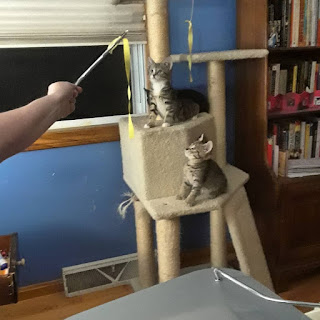 Meet Owl (tabby kitten on the lowest perch), Smudge (tabby and white kitten one perch up), and Eleven (black kitten hiding behind Smudge). They are about eight weeks old, still very shy, but very playful! 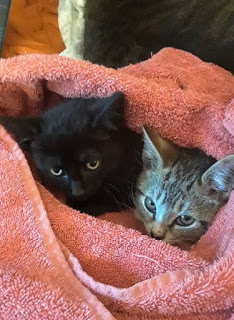 Here are Eleven and Smudge, all wrapped up in a kitty purrito. Swaddling them and petting them helps get them used to being handled by humans. 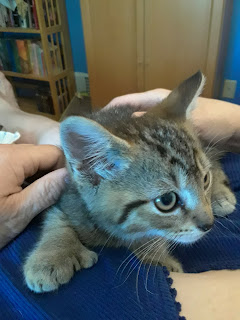 Something special we've noticed about two of these kittens: they have thumbs! Little Owl and Eleven are polydactyl cats, which pretty much doubles down on their already extreme cuteness.

They will be ready for adoption in about 3-4 weeks. Applications are available on the CARE web site. Email mirishouse(at)gmail.com if you would like to schedule a visit.

In the meantime, as always, we will happily accept donations of Royal Canin kitten food (canned and dry) and other kitty supplies through our Amazon wish list, or you can make a direct donation through our Paypal button. 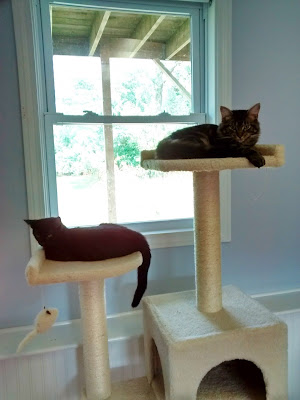 Bettina and Paris will be spayed and neutered on Tuesday, and then they will be all ready to go to their forever home.