We haven't had a new litter at Miri's House for a while, and we didn't really expect to have one this summer. We are already fostering Sirius Black Cat, a big, fluffy love of a Maine Coon mix who came to us after his family broke up, and finances are tough. But when we heard about a local rescue that was overwhelmed with homeless cats, including four nursing mamas, we just had to help out. Mama Emily, a little black cat who seems like she's still a kitten herself, arrived on a Thursday night. On Friday night, she gave birth to four tiny, sweet kittens. (For some reason, four seems to be the magic number in this house. This was the third litter born here, and all three moms gave birth to four kittens.) 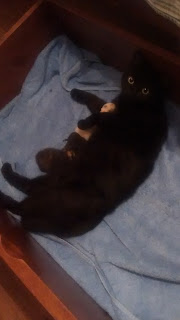 Since Mama had been rescued from the streets and was still very thin, we had hoped we'd have more time to build her up with good food. But the babies had other plans. At first, all seemed well. There were no complications with the birth, and the kittens, though smaller than we'd like, were nursing and seemed fine. There was a little white kit with black markings, two darker ones with tortie markings, and a dusky grey kit, the smallest of the litter.

Sadly, that kitten--who we named Dusk--only lived one day. At one point, we found him off to the side of the other kittens, cold and seemingly not breathing. We massaged him and blew air into his mouth and he revived. But late Saturday night, Mama Cat suddenly began acting strangely: sniffing the air, growling, running from place to place in the fostering room, and howling, as if something had come into the room to threaten her kits. We worried that she was sick, but when we checked the kitten drawer, we knew that something had come into that room. The littlest kitten was dead.

I've read enough cat rescue stories to know that birth complications, sickness, and even death of young kittens is not uncommon, but we've never lost a kitten before. It was heartbreaking. We buried him next to our first mama cat, Miri.

Fortunately, the other three kittens, Shadow, Ember, and Moondust, look to be thriving. They are just over a week old now and have more than doubled their weight. They were so tiny at birth that they looked like mice, but now they're more like guinea pigs! 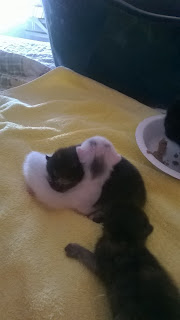 Still, this has been the most challenging fostering we've done. Mama is now fiercely protective of her remaining kits, and when she slipped out of her room and took off after foster cat Sirius Black, the sounds of her fury shook the house. There were visits to the vet (Sirius) and to the emergency room (people). At times, we've had to question: can we still do this?

I think we can. I'm hoping we can pass through these dark, tense early weeks into the joy and fun of watching growing kittens open their eyes, start to explore, and learn to run and play. I'm hoping we can find terrific, loving homes for all of them, including Mama Emily.

We've already received some great donations of food and toys through our Amazon wish list. We've also had help from friends (thanks, Marlaina, for being the best kitty midwife ever!) and Animal Advocates, Inc. If you'd like to help, what we can really use now is donations, as we would like to start a fund for the kittens' first vet visit and for getting Mama spayed. Please make your donation through our PayPal link, and follow our Facebook page for more photos and updates on Shadow, Ember, and Moondust.

Thanks so much to everyone who cares and helps! 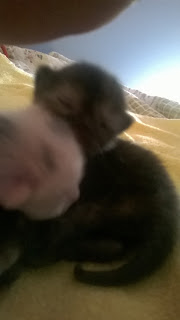